Spring Bank takes off above turmoil in banking industry 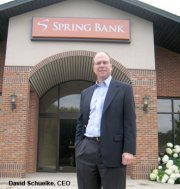 Spring Bank opened its doors in Brookfield in late August, 2008 – in a highly volatile economic marketplace.

Over the next year, many banks faced some of the most difficult operating environments in history. A few banks were forced to close by federal regulators, while some of the largest banks in the country needed billions in federal funding to prop up their balance sheets.

While the difficult financial environment has also posed challenges for the year-old Spring Bank, it also has presented opportunities for the bank.

“In this economy we’re in, people have become very concerned about FDIC insurance coverage and they’ve moved their deposits out of banks they are concerned about,” said David Schuelke, president and chief executive officer of Spring Bank. “We, being new, could only be a benefactor of these events.”

The bank, which specializes in commercial lending, has significantly grown its assets under management in the first year it has been open for business. It opened with about $12.5 million in capital that it raised in 2008, and the bank had about $52 million in assets by the end of July.

“I can’t imagine a better time to be a new bank,” Schuelke said. “We can be selective while a lot of other (banks) are on the sidelines. We don’t have to chase deals.”

For example, Spring Bank has been able to acquire well-performing loans, often at discounted prices, from other banks that needed liquidity.

“We (the team at Spring Bank) have been through the ups and downs in the economy before but what is different about this is that the banks themselves have liquidity and credit concerns,” Schuelke said. “In these times we’re seeing more businesses looking for new banks than we used to. We usually don’t see manufacturers looking for a new bank when the economy goes down. Now we are seeing businesses that are uncomfortable with their (banking) relationship. They’re concerned that their bank won’t renew their lines and some of them are looking before they need it.”

“The investment real estate, in four- to eight-family apartments, is a pretty good business,” Schuelke said. “We’re at an advantage because we can use the values of today and more conservative lending.”

Spring Bank was able to refinance real estate and commercial industrial loans for Jim Dorman. Dorman owns an 84,000-square-foot industrial facility in West Allis and is an investor in his son’s company, Granite and Stone Designs LLC in Brookfield.

“The granite and stone fabrication company needed more flexibility, and they (the bank) were very good in coming forth with loans,” Dorman said. “I was able to meet with the principals of the bank. They’re knowledgeable bankers and I was impressed with their background and abilities.”